Our this year’s Christmas card was measured with our Radome Measurement System (RMS-D-77/79G) equipped with a scanning positioning unit.

It shows a spatially resolved 1way-transmission image of a Christmas tree sprayed onto a PET foil in amplitude and phase. The tree is sprayed in uni green and the balls in metallic silver paint. The 100um thick uni paint creates a 6 degree phase shift with minimal impact on the attenuation. The much thinner metallic paint of only 20um creates a phase shift of 10 degree and increases the 1way attenuation by 0.7dB. This shows the strong impact of metallic base coatings. The aluminium pigments in the metallic paint used to generate a visual flip-flop effect significantly increase the electrical density (=permittivity) from ~3 for the uni paint to ~30 for the metallic paint. This increases reflections and reduces the transmission which can become critical, especially for radar sensors used for highly automated driving functions.

Therefore, it is important to investigate the influence of paint and painted surfaces (e.g. bumpers) on automotive radar sensors. The RMS allows characterization of material including automotive  paint layers in thicknesses of only 10um. Automotive paint and pigment manufacturer are using the RMS system worldwide to analyze paints properties and develop more radar transparent paints. 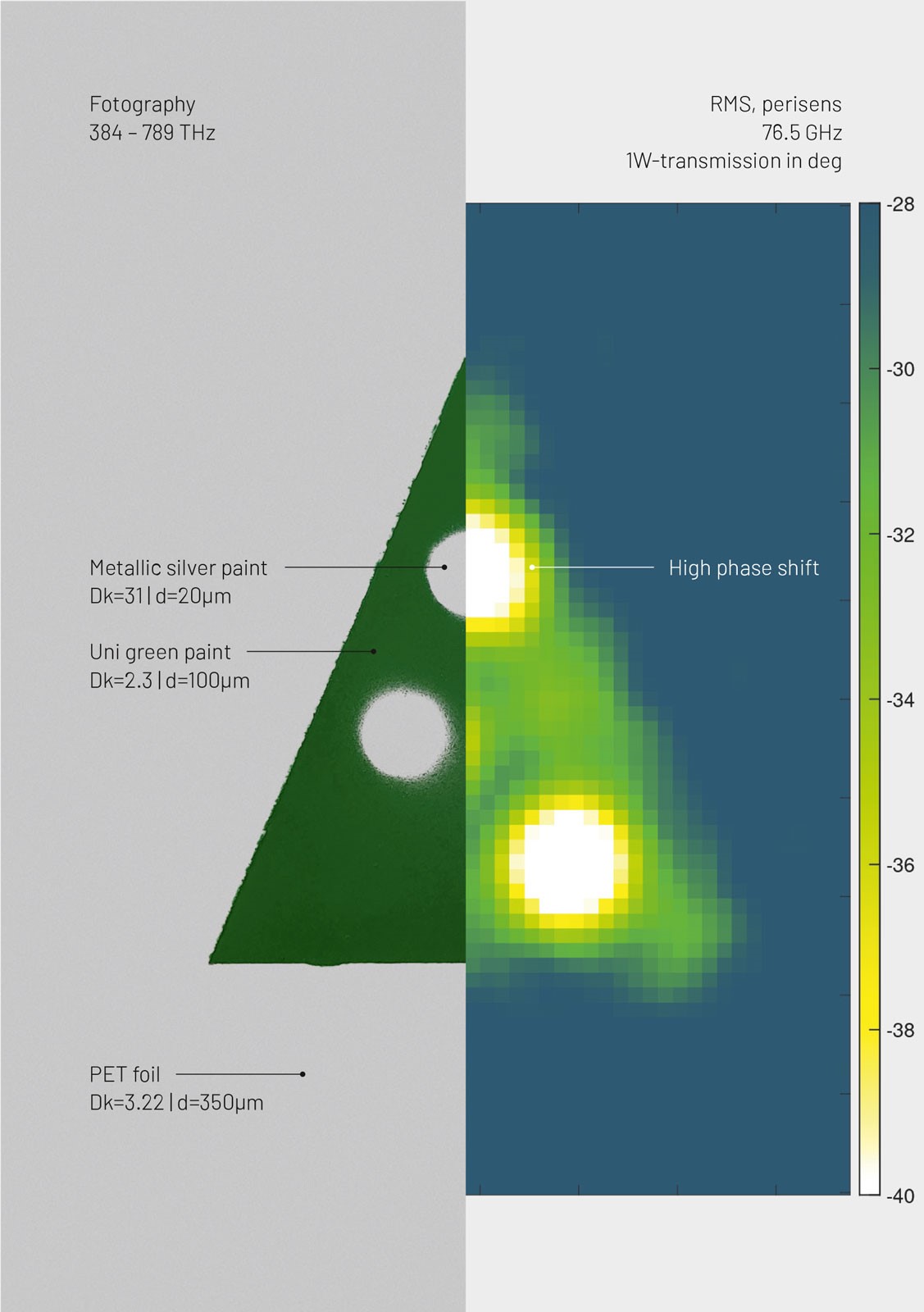 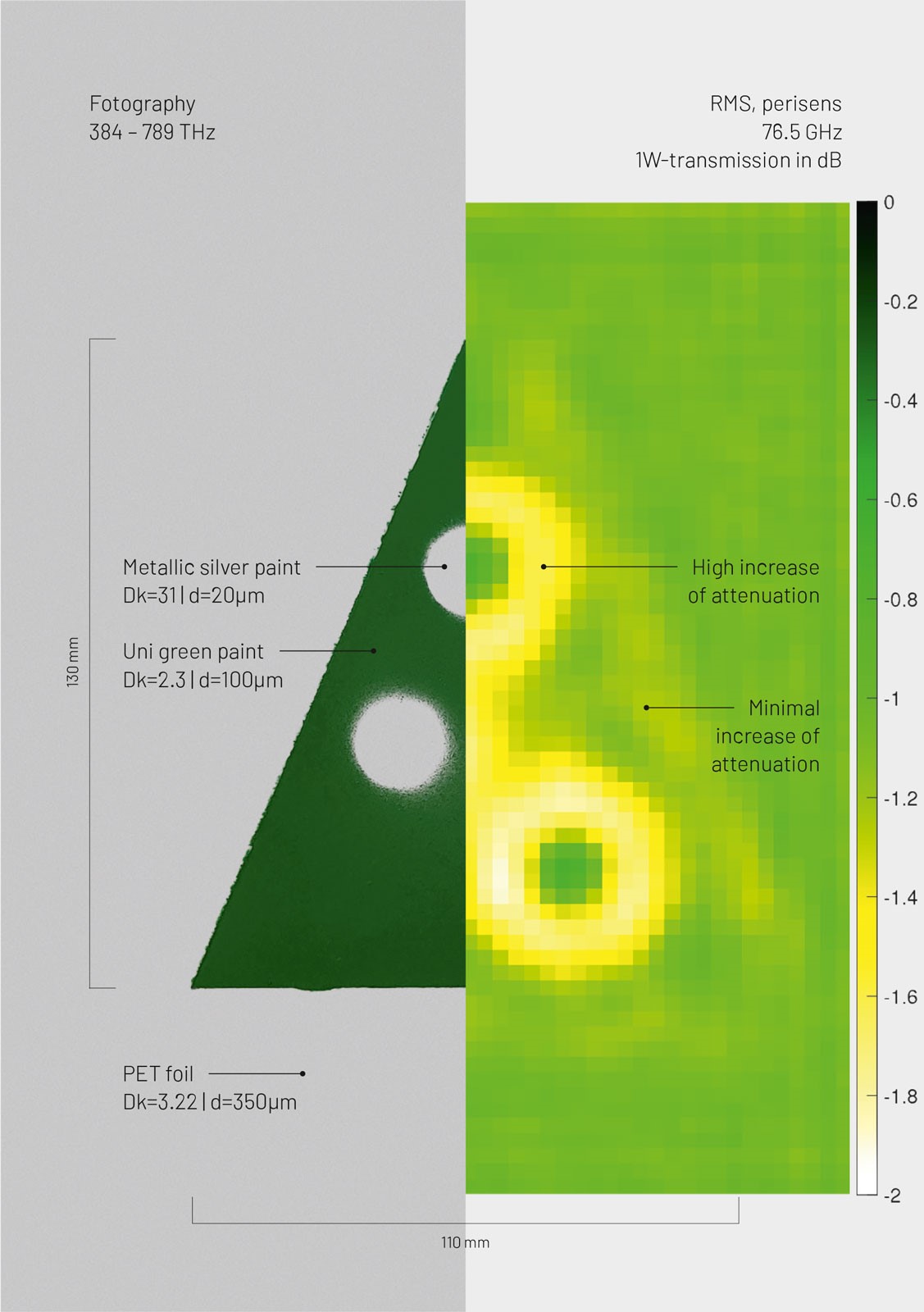 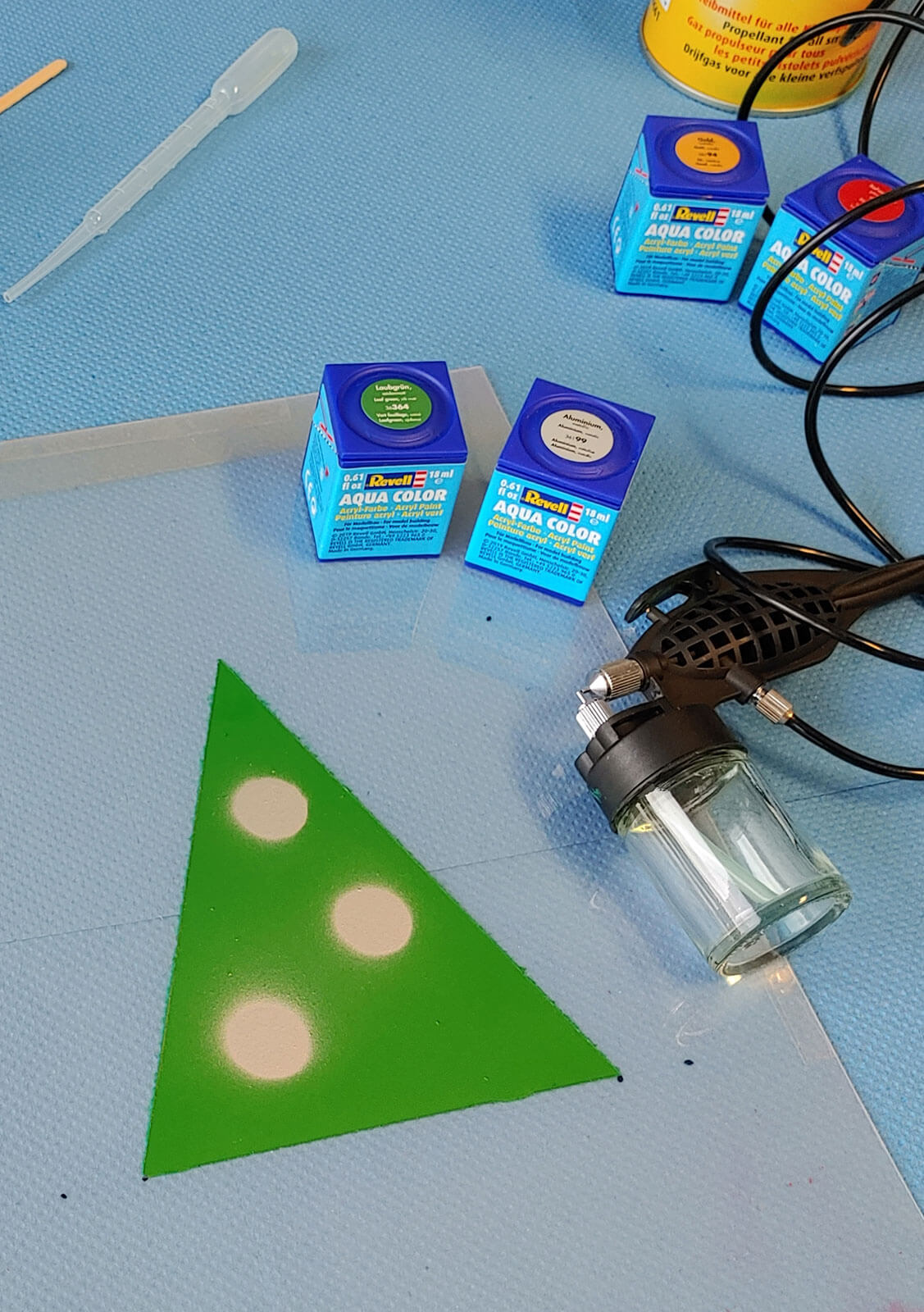 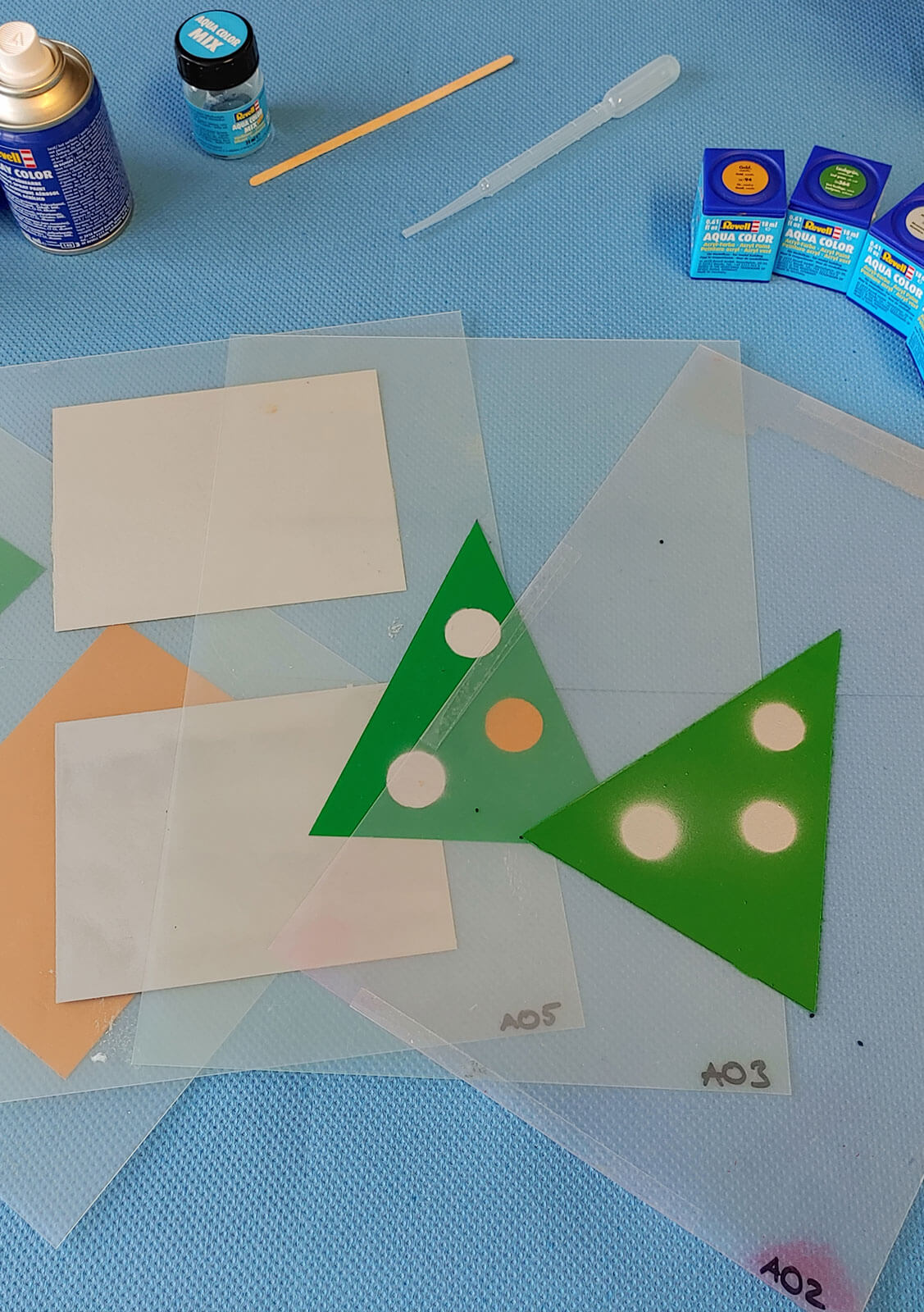 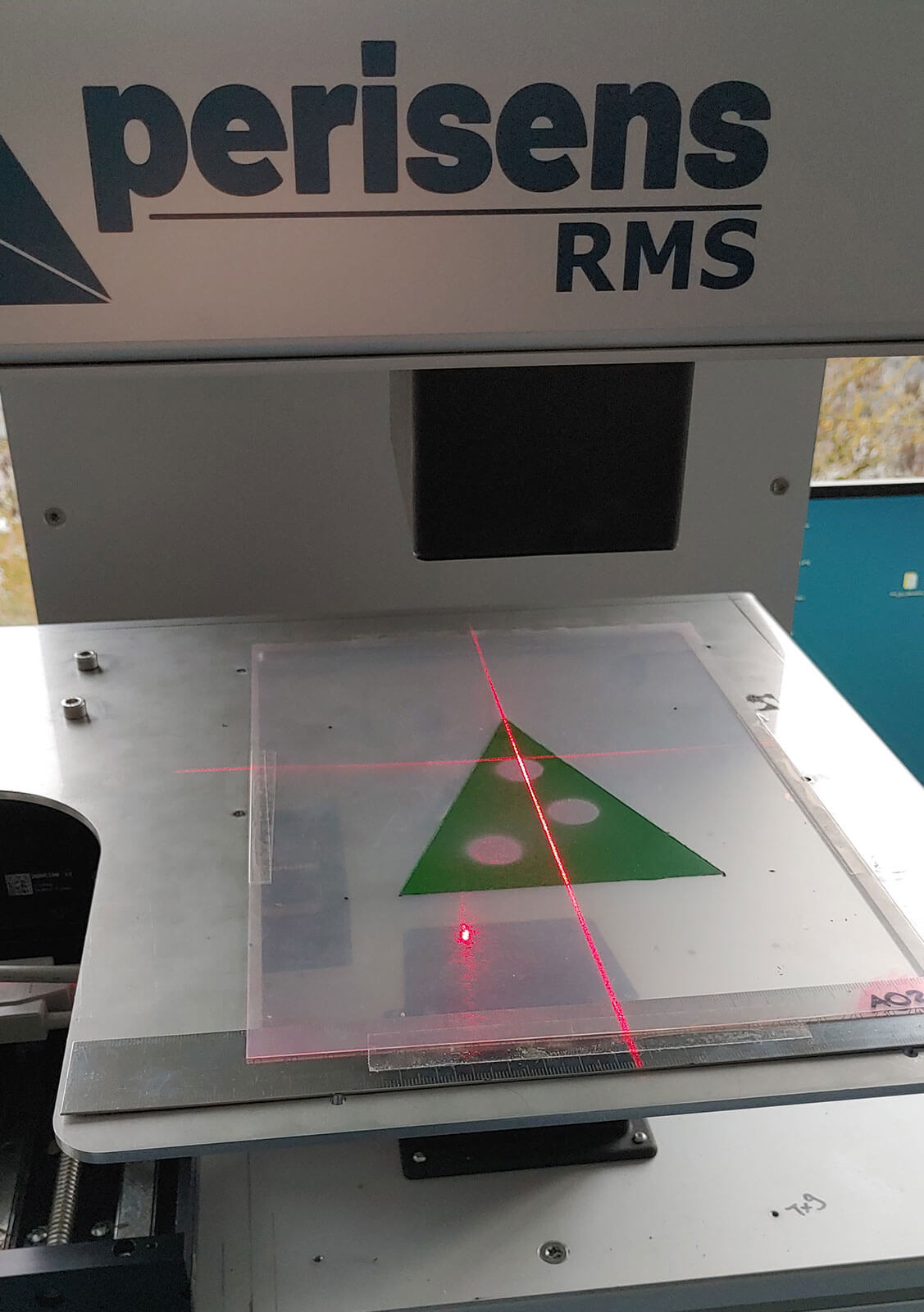 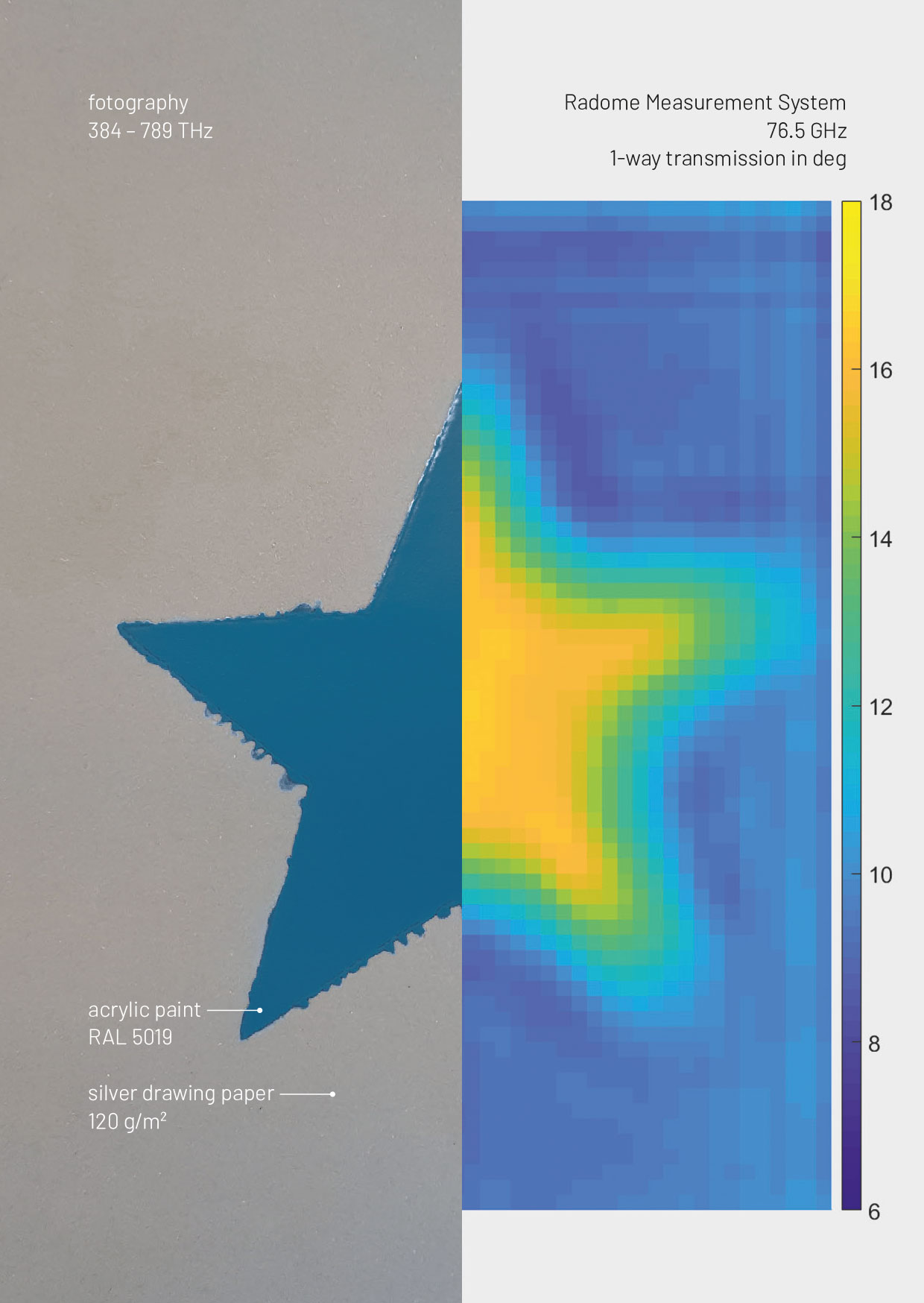 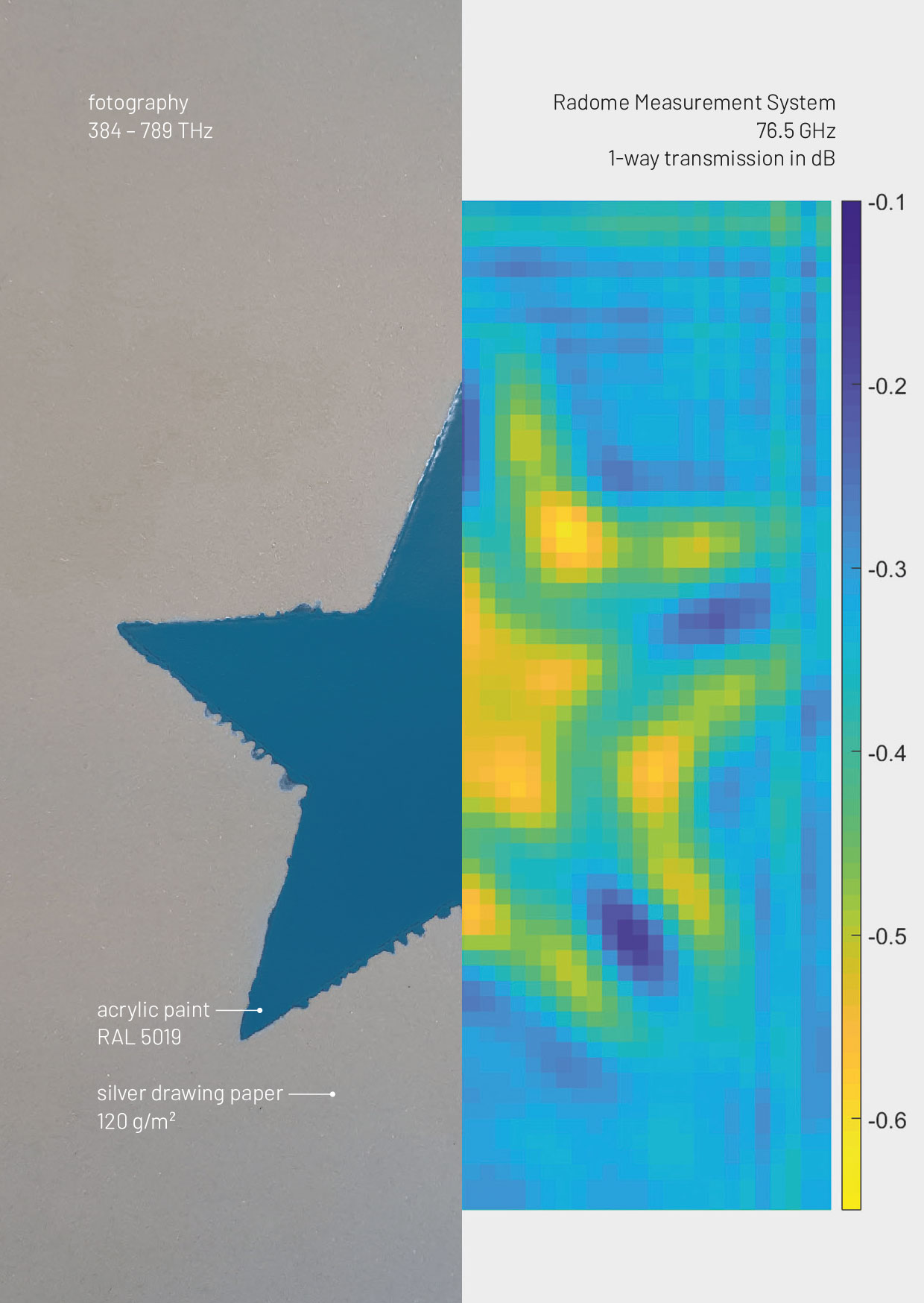 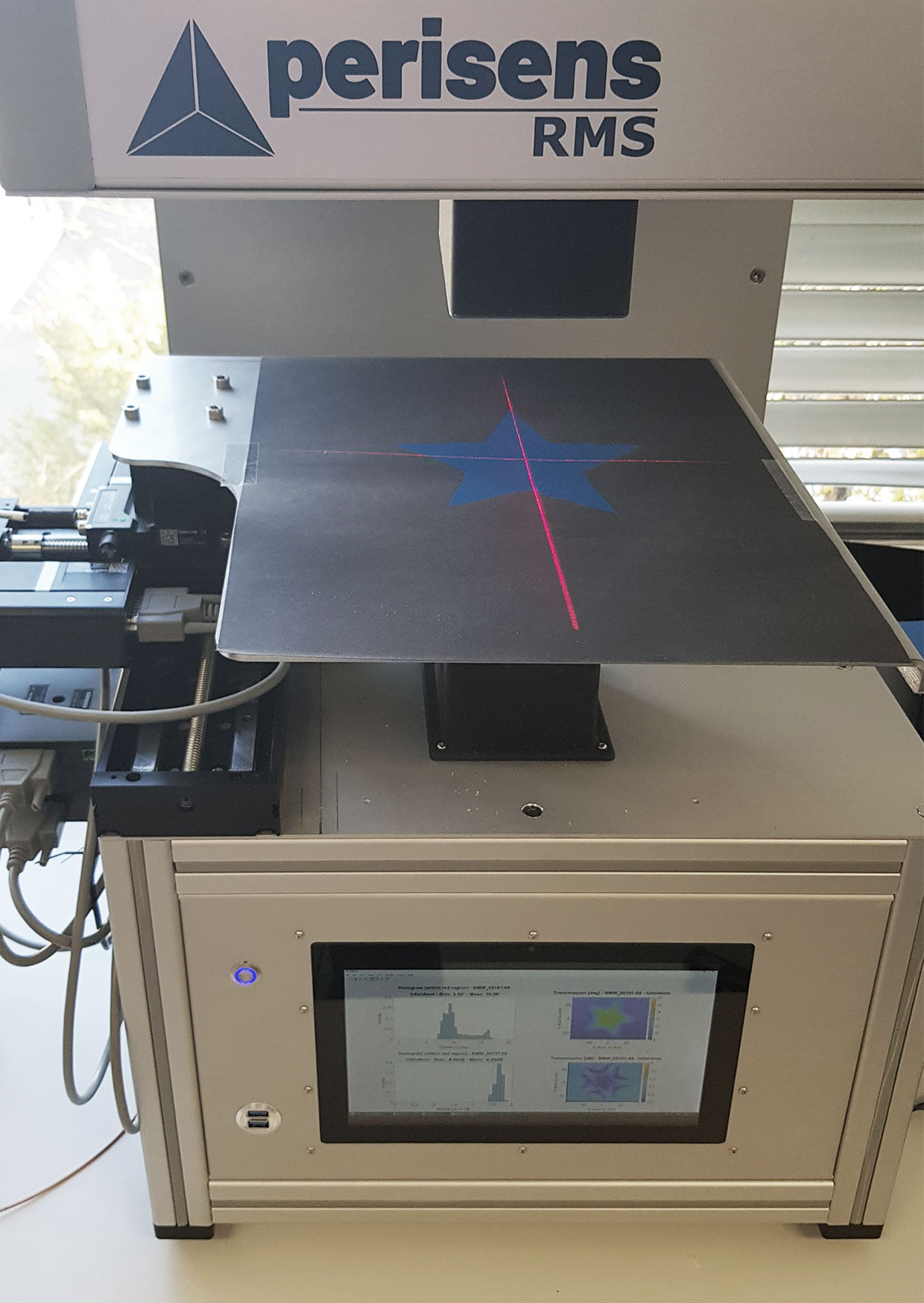 Our Christmas card from 2019 was measured with our Radome Measurement System (RMS-D-77/79G) equipped with a scanning positioning unit.

It shows a spatially resolved 1way-transmission image of a blue star sprayed on silver drawing paper in amplitude and phase. The acrylic paint increases the 1way-attenuation by ~0.3dB and creates a phase shift of ~10degree. Today’s automotive radar sensor are using the phase information of the receiced back reflected wave to derive the target angle (Direction of Arrival). Therefore, it is necessary that a radar cover causes an homogeneous phase shift. Variations of 10deg could affect the angle measurement and would bear the risk of incorrect lane assignment.

The RMS system allows car manufacturer and their supplier to analyze the radar performance of radar covers and to develop radar transparent covers. The RMS systems are also available in an robust alumina housing to perform end-of-line tests of radar covers to ensure the quality in production.

Our Christmas card of 2018 shows a radar image of a metal Christmas tree in co- and cross-polarization at 76.5GHz.

The Christmas tree was measured with our Scanning Imaging Radar (SIR) which allows to generate high resolution radar images at 76.5GHz. The first image shows the Christmas tree in co-polarization using receive (RX) and transmit (TX) antennas which are both horizontal polarized. The polarization of an antenna refers to the orientation of the electrical field of an transmitted or received electromagnetic wave. On the radar image you can see the metal surface of the tree and the Christmas balls as a single point (the specular reflection point).

The second image shows the same Christmas tree measured in cross-polarization setup using horizontal polarized TX and vertical polarized RX antennas. Such cross-polarized measurement system can only receive signals from geometries which transform the polarization state of the electromagnetic wave. This happens at diagonal edges which are the only structures visible in the image. Surfaces (as the surface of the tree and the balls) on the other hand, are completely invisible as they do not change the wave polarization. 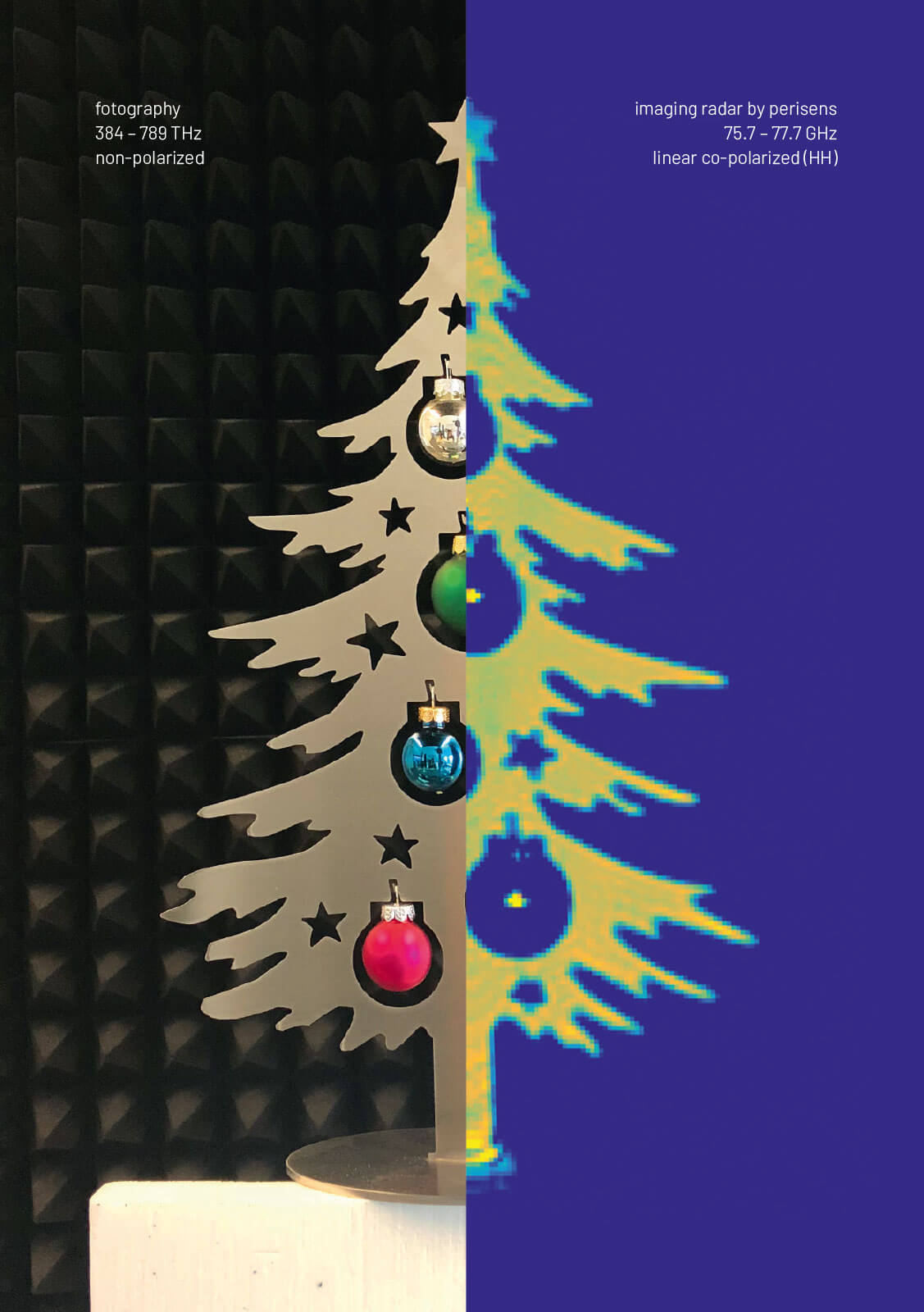 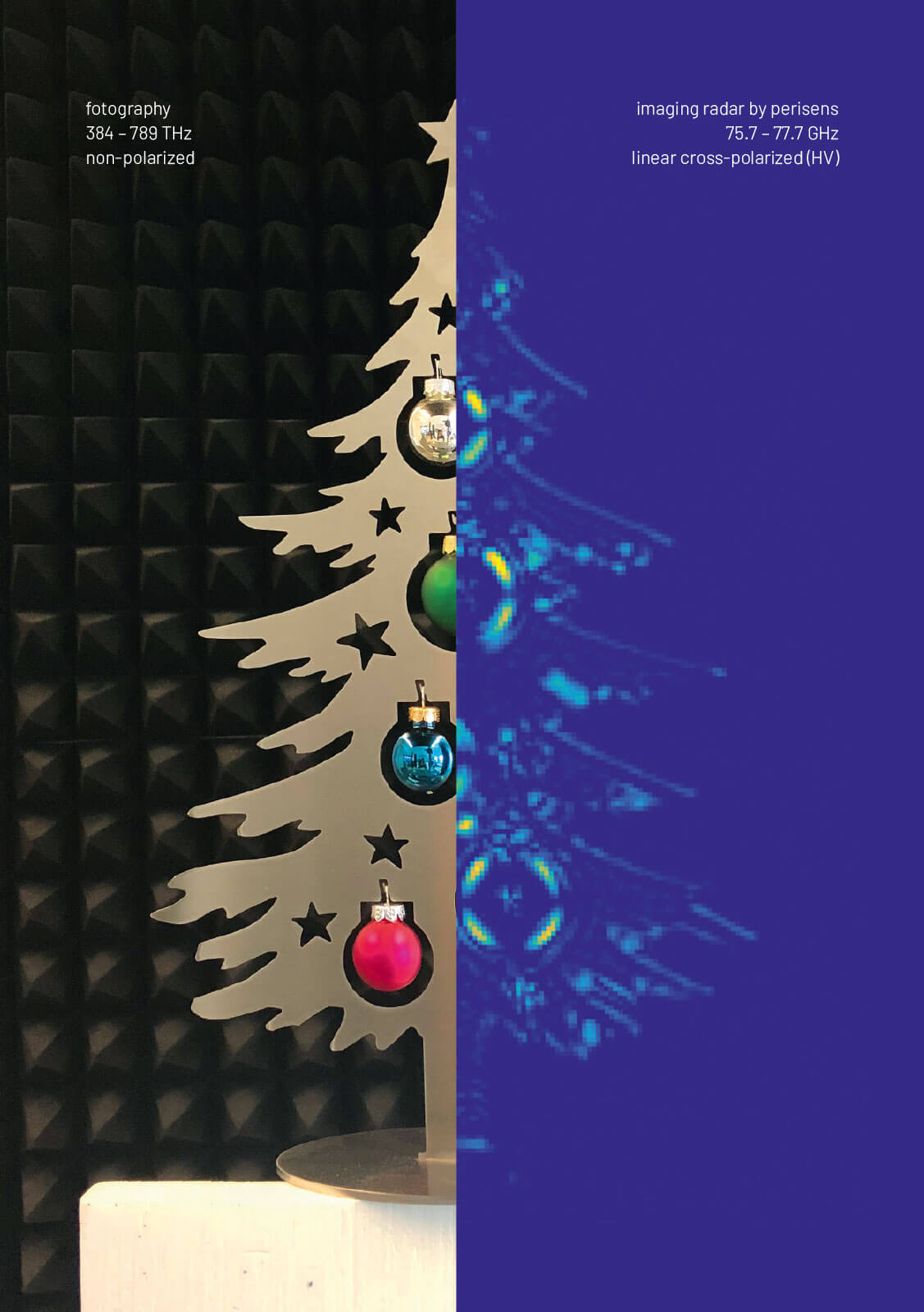 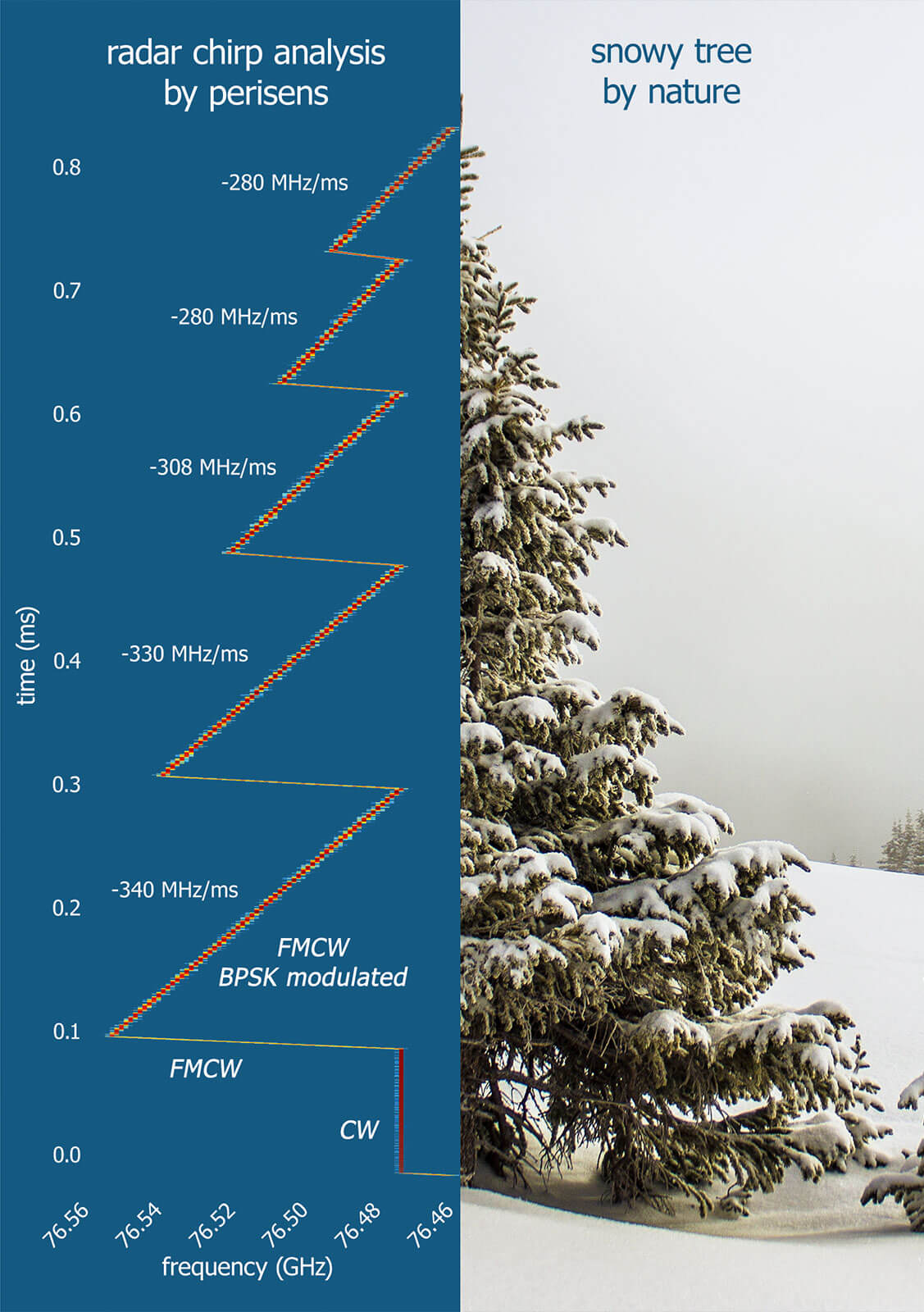 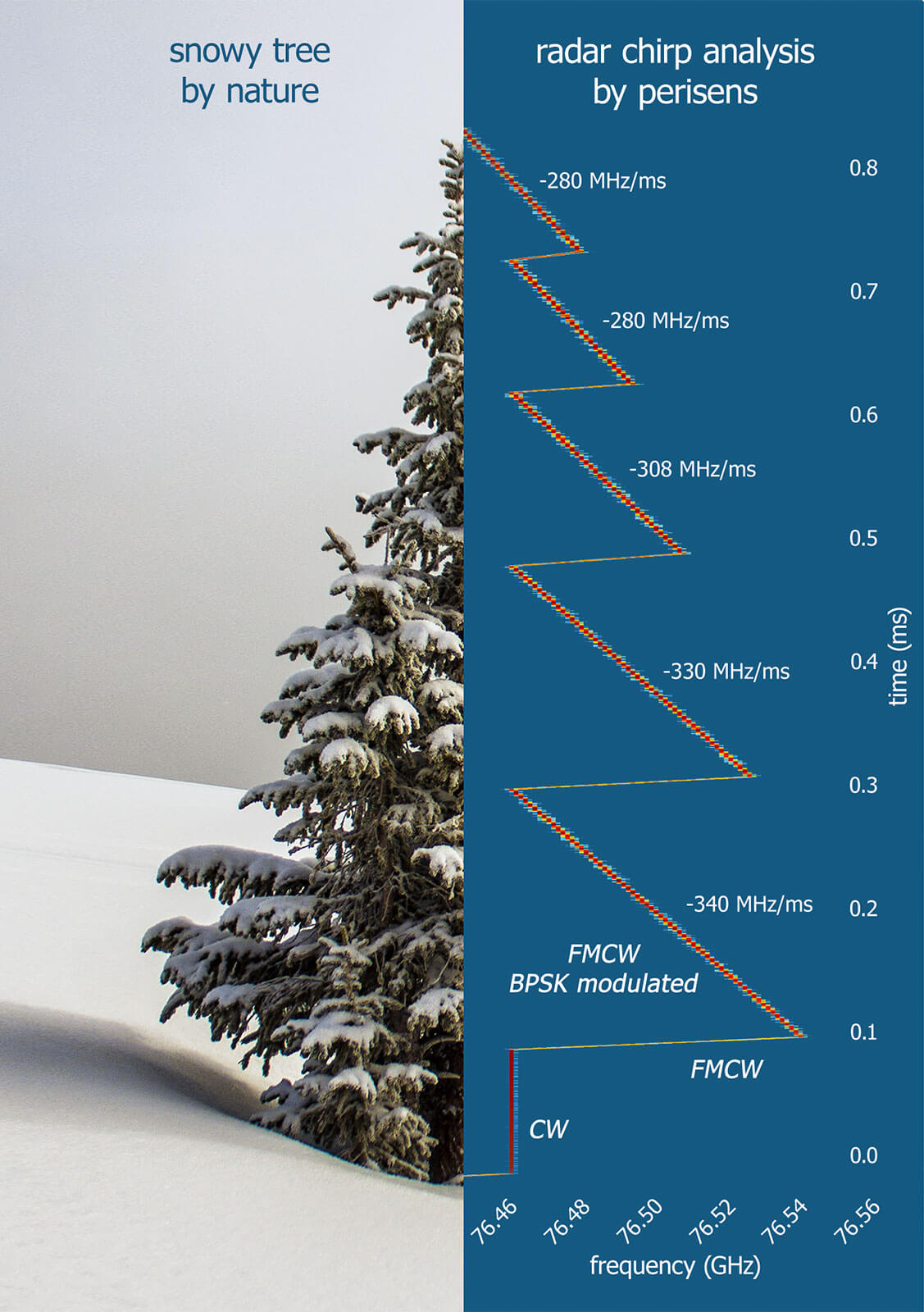 The configuration of the frequency ramps was determined, and the complex baseband data (IQ data) was calculated in MATLAB. In order to make the edges of the tree more visible, the ramps running to the upper right were modulated with a binary phase coding (BPSK with pulse duration of 1us). The modulation broaden the ramp in the frequency spectrum. In modern MIMO (Multiple Input Multiple Output) radar sensors are using phase coding to separate several simultaneous transmit signals in the receiver paths.

The FMCW radar signal was generated with a vector signal generator at an intermediate frequency of 1 GHz. Using a Radar Frequency Converter (RFC), the 1GHz signal was upconverted to the radar band (76.5 GHz) and transmitted via a rectangular horn antenna in our radar laboratory. The radar signal was then received with our Radar Target Simulator (RTS) and analyzed with our Radar Signal Analyzer (RSA). The RSA is connected to the IF output port of the RTS and enables an analysis of FMCW signals.

The linearity of FMCW ramps is crucial for the quality of the raw data of a radar sensor. Our Radar Target Simulators and Radar Signal Analyzer are used to develop future radar sensors. In addition, our devices are used in production to generate highly accurate reference targets for calibrating the sensors.

Our Christmas card from 2016 shows a spatially resolved reflection image measured at the automotive radar frequency of 77GHz measured with our Scanning Imaging Radar.

First, the Christmas boy (in German “Weihnachtsmanschgerl”) was baked with love and decorated artfully. It was then measured in our high-frequency laboratory and photographed. The radar image was measured with a scanning method based on a synthetic aperture radar which is also used for remote sensing in aircraft and satellites.

We use the Scanning Imaging Radar (SIR) to evaluate radar covers (radomes) and to ensure that the radar sensor is not disturbed by its cover. In a joint project with Continental, Volkswagen and TU Muenchen the use of synthetic aperture radar was analyzed for automotive sensors. With the ability to generate very large synthetic apertures during passing a scenery, highly accurate radar environment maps can be generated. 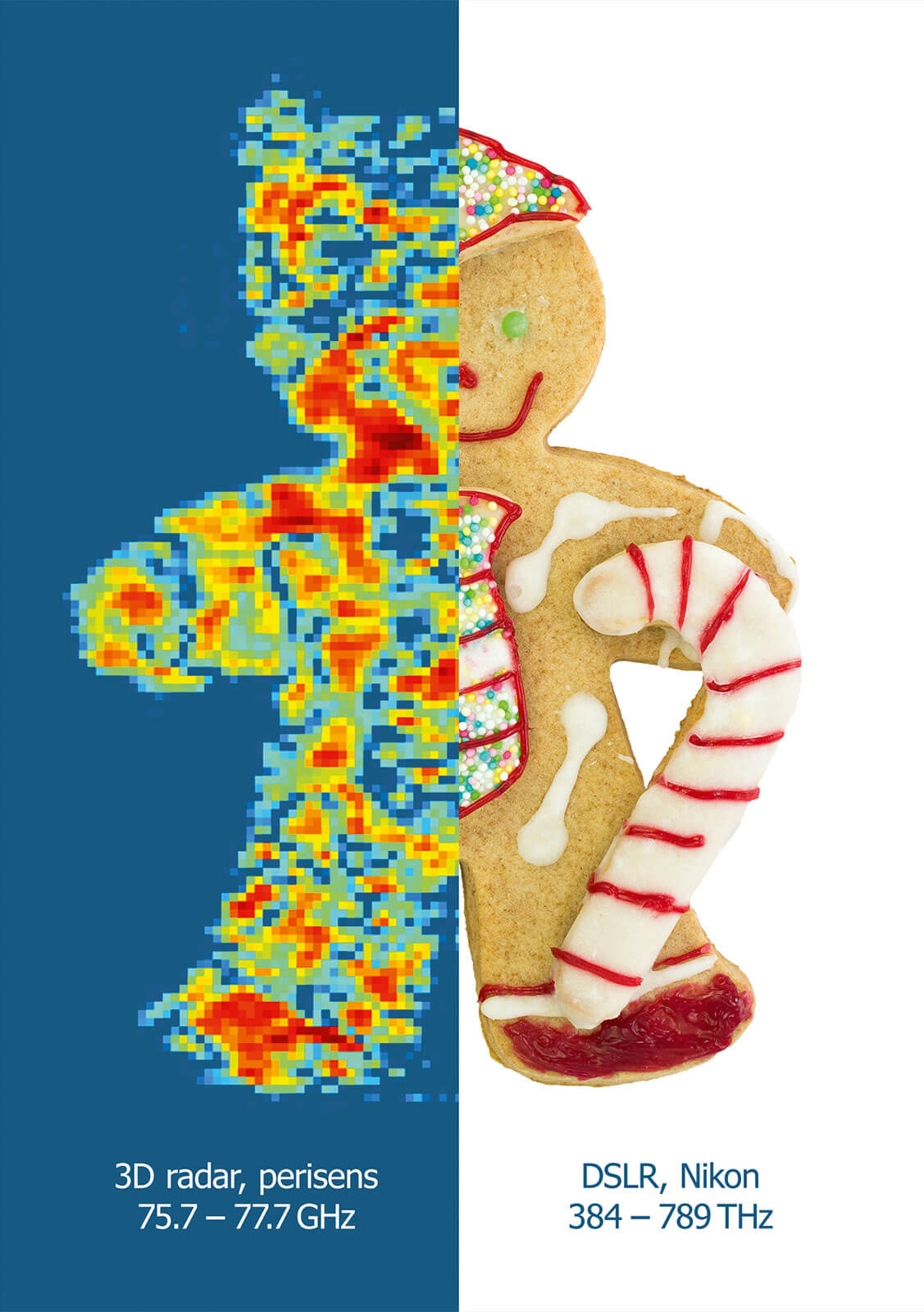 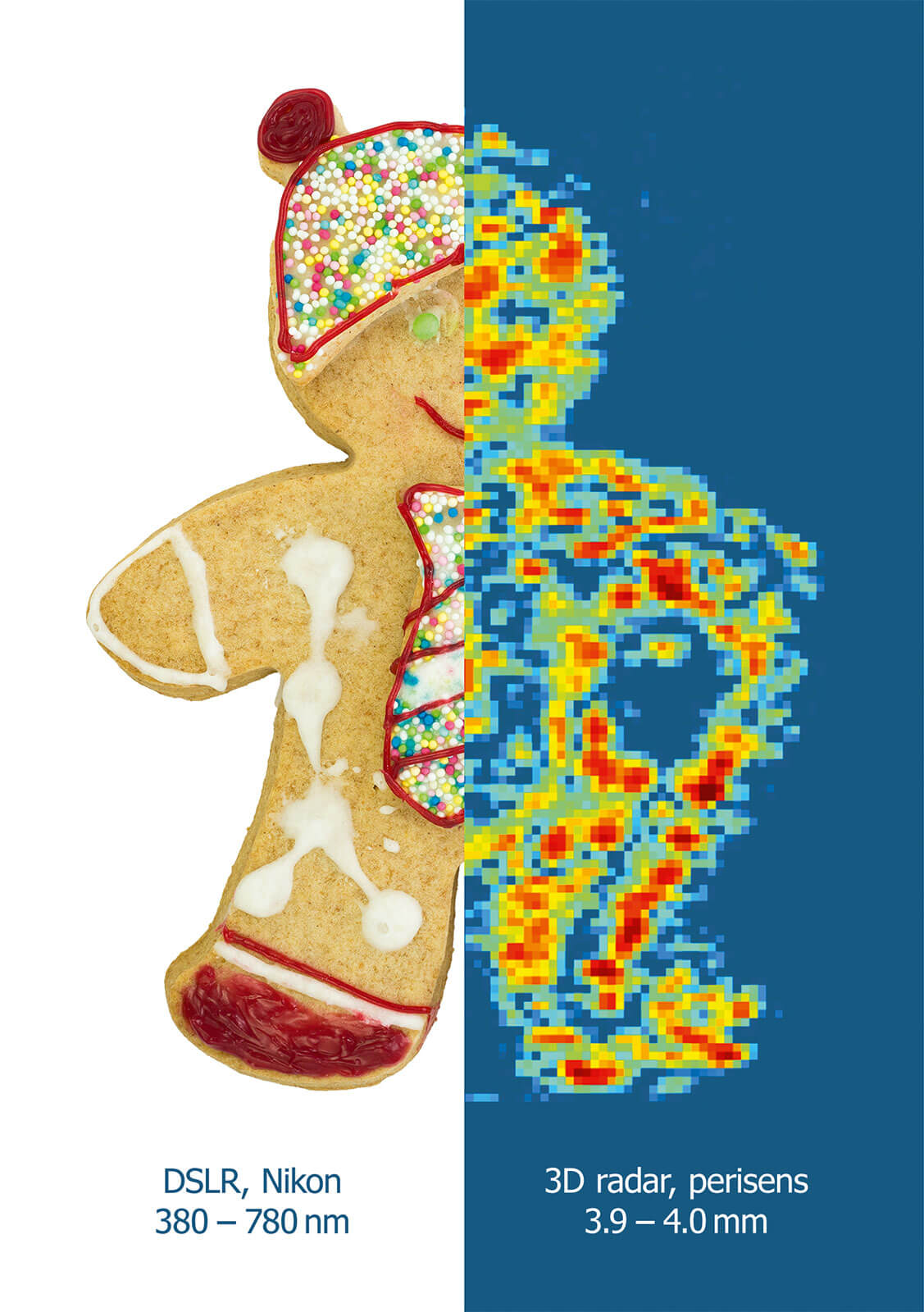 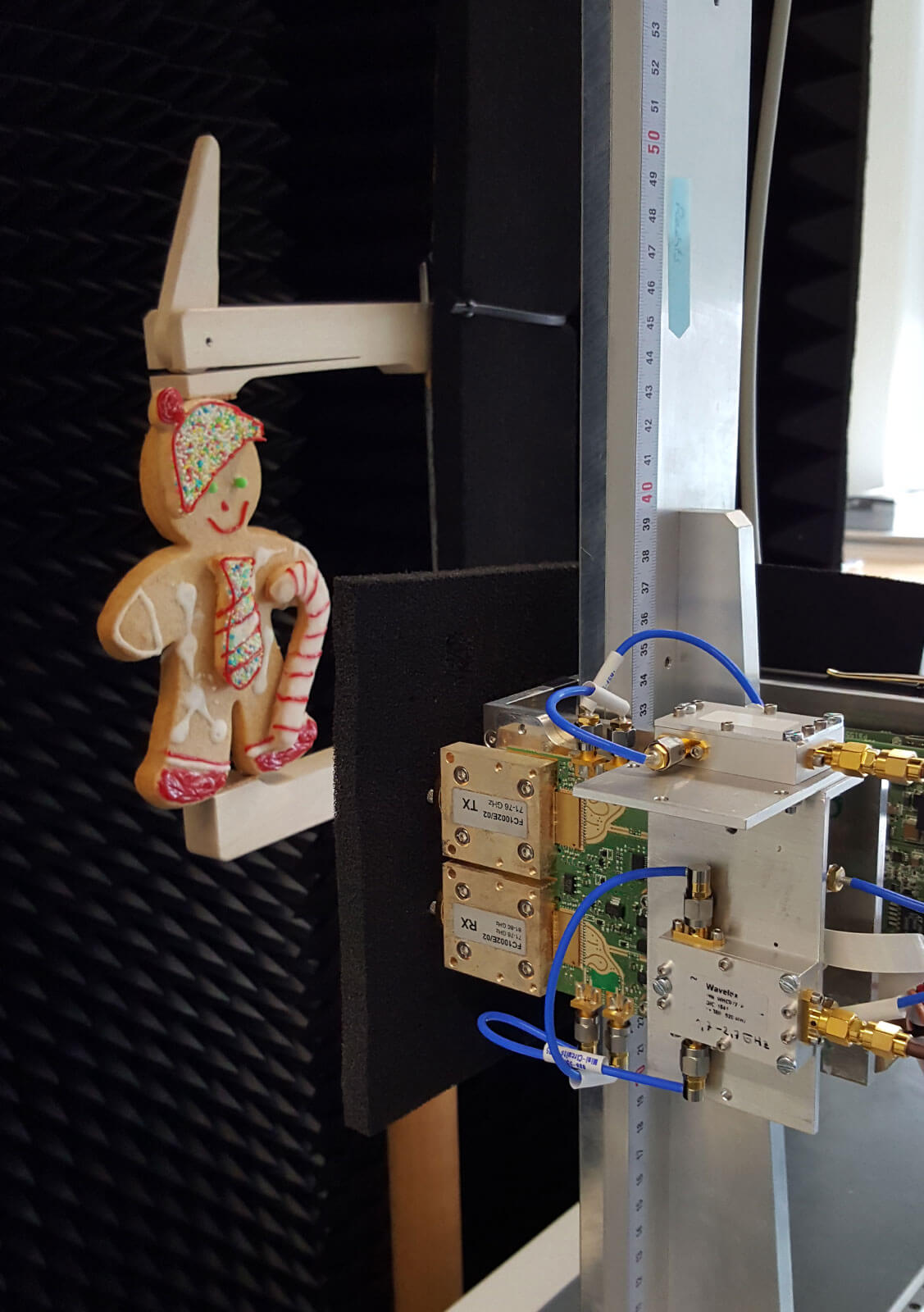 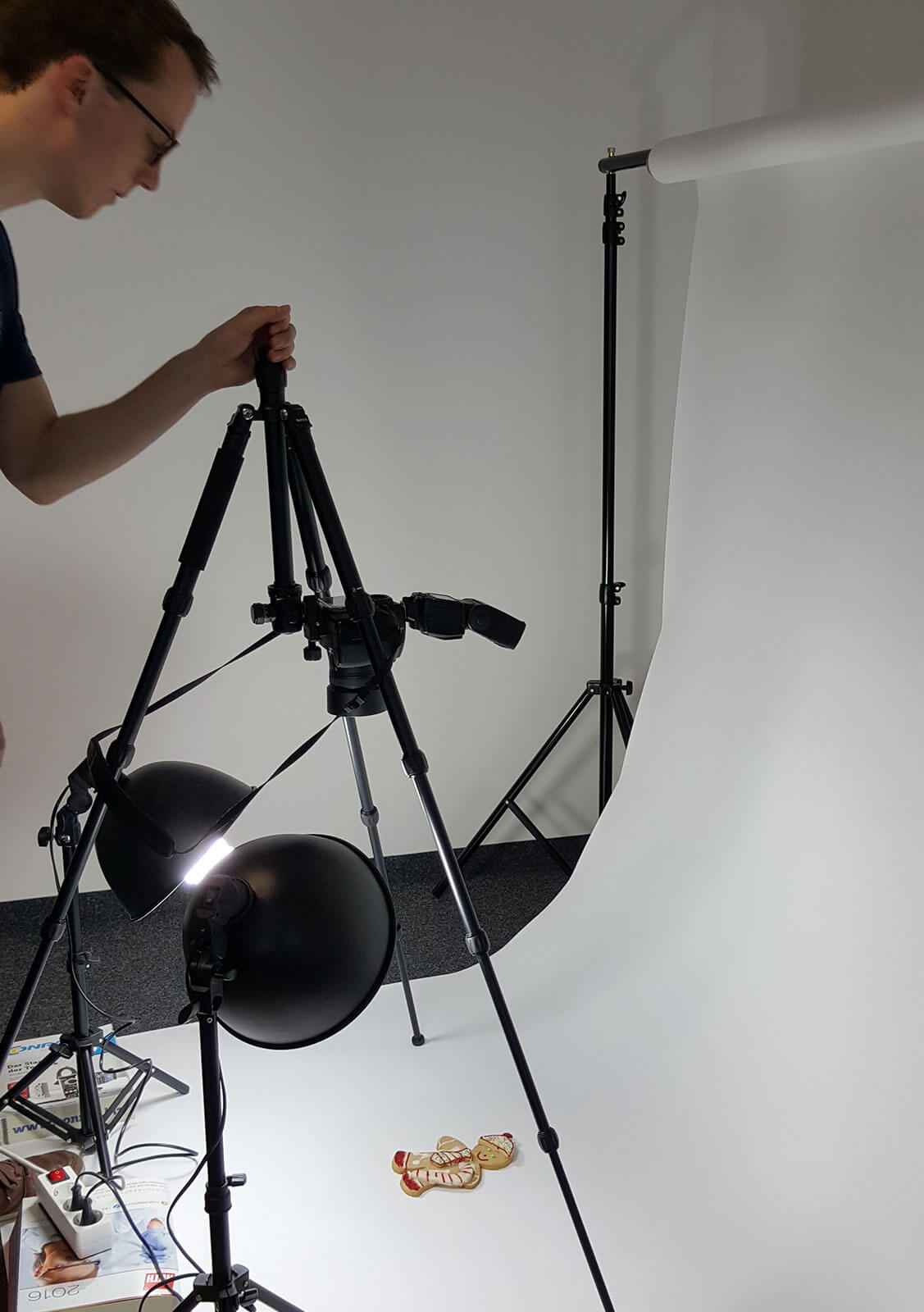